2
First Tuesday Concert Series: Bookends
Croswell Library
Tuesday, January 4 @ 6 PM
We are excited to host Bookends for the third time for our First Tuesday Concert Series.
Tom Schlichting and Dean Barnett are a Simon and Garfunkel tribute duo with superb harmonies and excellent guitar work.
First Tuesday Concert: Christmas Sing-Along
Featuring Jim Williams of Ruby Hill
Tuesday, December 7 @ 6 pm
Song book link
http://croswell-library.com/…/11/christmas-sing-along.pdf
All ages welcome
Mix of secular and spiritual Christmas classics
Come early for cookies and cider
Song booklets provided
We Wish You a Merry Christmas
Deck the Halls
Winter Wonderland
God Rest Ye Merry Gentlemen
Rudolph the Red-Nosed Reindeer
Joy to the World
O Christmas Tree
I Wonder as I Wander
Come All Ye Faithful & Silent Night
Frosty the Snowman
Frosty (cont.)
Silver Bells
Away in a Manger
The Twelve Days of Christmas
Jingle Bells
Sanilac Genealogical Society
November Meeting (open to the public)
Tuesday, November 16 @ 1 PM
Aitkin Memorial District Library
111 North Howard Avenue
Croswell, Michigan
Presented by: Cheryl L. Morgan, author of “Ottissippi: The Truth about Great Lakes Indian History” and “The Gateway to the West.”
Groundbreaking research covering the history and culture of the indigenous people that shaped the development of the Thumb and Southeastern Michigan.
Ms. Morgan will have copies of “Ottissippi” available for purchase.
Book Discussion: The Witches
by Stacy Schiff
October 28 @ 2:30
********************************************
Salem, 1692
Suspicion, Betrayal, and Hysteria
It began in 1692 It ended less than a year later, but not before 19 men and women had been hanged and an elderly man crushed to death. The panic spread quickly, involving the most educated men and prominent politicians in the colony. Neighbors accused neighbors, parents and children each other.
As psychologically thrilling as it is historically seminal, The Witches is the fantastic account of this fantastical story — the first great American mystery unveiled fully for the first time
“The Witches is the fullest and finest story ever told about Salem in 1692, and no one else could tell it with the otherworldly flair of Stacy Schiff”
― Joseph J. Ellis, Pulitzer Prize winning author

Mary Shier shares the remarkable tale of her father’s escape from the Nazis in WWII.

Bill Spinning was a lead bombardier stationed at Polebrook, England with the 8th Air Force, 351st Bomb Group, 509th Bomb Squadron. On his 9th mission, he and his crew were shot down while on a raid to Frankfurt, Germany. They had been hit by flak, the pilot had to lower his wheels to show he could no longer stay in formation. After making it back almost to the English Channel, Kentucky Babe was attacked by FW-190’s in the Somme region in France. With the plane going down all crew were told to jump. This is my father’s story of escaping and evading the Nazi’s with the help of the French Underground.

Ourselves are Tom and Walt Schlichting with Lynne Surbrook

After Hours Candy Hunt
At 7 o’clock, we’re locking the doors and turning off the lights while kids use flashlights to hunt for candy

Our Saturday Story Time is back! Join us for an exciting craft and related story every Saturday morning at 10:30 AM.
Activities and stories aimed at kids aged 3-9 years old. 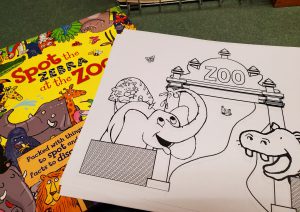