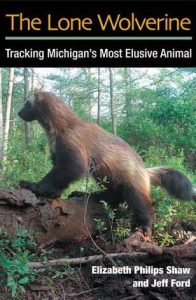 Michigan is the Wolverine State. It’s been our unofficial state motto since our southern neighbors discovered that we were the ugliest, meanest, fiercest creatures of the North. Rather than hide from the insult, we embraced it as a symbol of northern toughness. Curiously though, no living wolverine had ever been documented in Michigan. For almost 200 years, we had been the Wolverine State without proof of a wild wolverine ever stepping foot on our soil until one winter day in 2004 in the most unlikely of places.

Of course, there had been “sightings” of wolverines in Michigan, along with UFOs, Bigfoot, and Elvis in Kalamazoo. As the first calls of a wolverine sighting came into the DNR office on that cold February morning, the conservation officer took it about that seriously. Eyewitness testimony is slightly better than useless, except when it’s worse. People mistake raccoons for bears, dogs for wolves, and housecats for cougars. It’s easy to imagine the officer patiently rolling his eyes as the first call came in and becoming annoyed as the phone kept ringing but when the call came claiming the wolverine had been treed a few miles south of Bad Axe, it could no longer be ignored. The DNR got there just in time to officially document the first wolverine sighting in the history of the Wolverine State.

This mysterious wolverine sighting in Michigan’s Thumb provoked more questions than answers. For Deckerville science teacher and track coach Jeff Ford, the mystery became an obsession. After surviving a family tragedy as a young child, Ford developed an intense bond with the rhythms of the natural world. The solitude and the potential for discovery and connection animated his youth, while allowing his psychological trauma to scar over. He continued to be an avid outdoorsman as an adult, publishing his writings in various outdoor magazines. By 2010, he had earned the title, “The Wolverine Guy” for his work documenting the story of the Michigan Wolverine.

How did a wolverine end up in the heart of Thumb, hundreds of miles from the nearest known population? “The Lone Wolverine” tells of Ford’s relentless search for the answer. He pursued it through muck and snow and pushed his ailing heart to the limit. He paid the price for the obsession with time, debt, and familial strain.  For six years, he haunted the Minden City Swamp in search of its most famous resident; tracking her, photographing her, collecting DNA samples, and ultimately falling in love with his “pretty gal,” the lone Michigan Wolverine. We’re all richer because of it. Thank you, Mr. Ford.